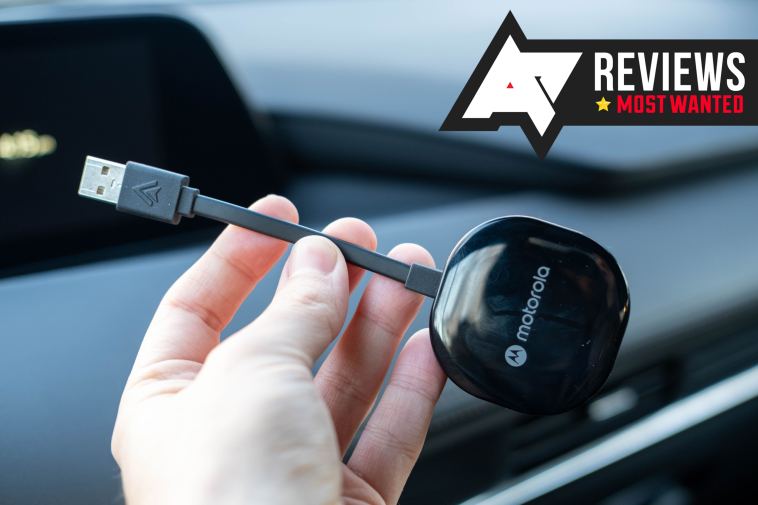 Android Auto has existed for years, and now most new vehicles support it. Some cars can even run Android Auto wirelessly—no plugging in your phone and tossing it awkwardly into a cup holder. Wireless AA is mostly limited to luxury vehicles and the higher trim levels of mid-range cars, but what if I told you wireless Android Auto can be yours in almost any vehicle for just $90? That's what it costs to get the Motorola MA1, the first wireless Auto dongle Google has seen fit to promote. I've been using the MA1 for the last few months, and I've barely had to use my USB cables. I was expecting to enumerate the bugs, frustrations, and shortcomings of this device in the review, but I'm here to tell you a very different story: the MA1 is great, and you should buy it… if you ever find it in stock.

The Motorola MA1 adds wireless Android Auto to your car in just a few seconds, and it works surprisingly well.

Design, hardware, what's in the box

Everything about the MA1 is understated, which makes sense. The idea is to put the MA1 in whatever vehicle nook houses your USB port, and then you almost never have to look at it again. It's a bit like a set-top box in that respect, and it looks like one. It's a black plastic puck with a non-removable USB cable sticking out of one end. On the opposite end, the dongle has a single LED indicator. The only control is a single pairing button on the side, but you might not even need to press it after the initial setup.

The MA1 has a USB-A cable, which is standard on almost all cars these days (only a few have USB-C). Since the cable isn't very long, the MA1 might dangle awkwardly depending on the location of your USB port. I tested the MA1 in a car that has a port under the dash and another inside the center console. The dongle worked in either, but the center console kept it out of sight. Usually, I'd plug my phone in and drop it into the console. Now, it can stay in my pocket, and I don't even have to open the console.

There's no microphone on the MA1, so voice controls still need to go through your phone. That's a slight annoyance if the idea is not to touch my phone when I get in the car. A phone deep in your pocket won't be able to hear you very well, after all. I consider this a relatively minor drawback, though. Assistant in Android Auto is never very good, even if it hears you perfectly. I try to avoid using it as much as possible.

There's nothing in the MA1 box aside from the device itself and an instruction manual. The box is also extremely basic with no prominent branding or fancy graphics—while this is a “Motorola” product, Motorola Sound is just one of several companies that license the Moto name. I wouldn't hold that against the MA1, though.

Getting started with the MA1 is a snap—all you need to do ahead of time is make sure your phone has been paired with your car via a cable. After that, you can swap the cable for the MA1 dongle. Bluetooth would be too slow for Android Auto mirroring, but you still start in the Bluetooth menu. Simply pair your phone with the MA1, which should begin broadcasting as soon as you plug it in. After that, your phone (running Android 11 or higher) will negotiate a Wi-Fi Direct connection to the MA1, and Android Auto will appear on your vehicle display like magic. For the record, I tested the MA1 in a 2021 Mazda 3 with a Pixel 6, a Z Fold3, and a Galaxy S22 Ultra. I initially had issues with the S22 Ultra, but that was a pre-release review unit. I have since tested with a retail version of the phone, and it works without issue.

The first pairing will take 15-20 seconds, but after that, Android Auto should start up in just a few seconds. You should not need to fiddle with Bluetooth again, but I did have to manually re-pair on one occasion for reasons I was never able to ascertain. The connection was otherwise very quick. Even adding another phone is pretty painless. Simply long-press the pairing button, wait for the LED to flash indicating it's in pairing mode, and connect to a new phone. It even remembers multiple phones so you don't have to go through the pairing song and dance with a second driver. It's a little more arduous if there are two paired phones nearby. If you need to switch between devices, you long-press the MA1's lone button to put it in pairing mode and reconnect in the phone settings.

The 5GHz Wi-Fi connection with the MA1 has more than enough bandwidth to project the AA interface—my phone reported a link speed of about 400Mbps. I'm sure running through an external dongle introduces latency, but the good news is that, for once, Android Auto's general sluggishness helps by hiding that shortcoming. Using wireless AA in my car feels remarkably like using it wired. I have not had any disconnections, and there were only a few hiccups, all almost imperceptible. The most concerning part of the experience is Assistant, which doesn't even work very well over a cable. I've seen Assistant hang a few times while using the MA1, but I can't say for certain it's the dongle's fault.

The primary drawback to the MA1 is battery life. If you go to all the trouble of getting the MA1, you probably don't want to plug the phone into a charger—that would defeat the purpose. That means your phone will burn through battery at a rate of 10-20% per hour (depending on your phone's capacity). Most of my driving consists of short trips, so I spend less than 30 minutes in the car at a time. For me, the MA1 is a great addition to the AA experience. I can leave the phone in my pocket, and losing a little battery life is worth it for the convenience.

I took the MA1 for a longer ride recently. After about an hour of streaming, the dongle still worked fine. The Pixel 6 I was using to test, on the other hand, was burning up. Battery drain was still tolerable, but today's phone hardware sure does get warm. I would not recommend using the MA1 (or any wireless Android Auto implementation) while charging a phone that already has a tendency to get toasty.

Yes, and I'm surprised to be saying this—I didn't think the MA1 would work as well as it does. It connects quickly, stays connected, and Android Auto works as well as it does with a cable. That is to say, it gets the job done. The convenience is definitely there. I can get in the car and start driving without even touching my phone, and Android Auto will be there within a few seconds. While this doesn't matter much to the average user, I also love how easy it is to add a different phone. It's really just a 20-second process.

I don't love how much battery wireless Android Auto uses with the MA1. I tested mostly with the Pixel 6, and that phone burns through 10-12% in an hour, but a phone with a smaller battery will lose more. This is an acceptable tradeoff for me as I don't need to be in the car for long periods, but this might be a deal-breaker if you already have range anxiety with your phone. The $90 price tag is a bit on the high side, too, but other wireless AA devices are in the same range, and none of those have Google's blessing. If you're sick of cables, the MA1 is worth the price. It's in short supply, so you'll just have to keep an eye out for it to be in stock. 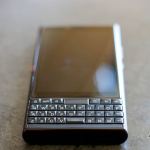 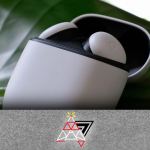