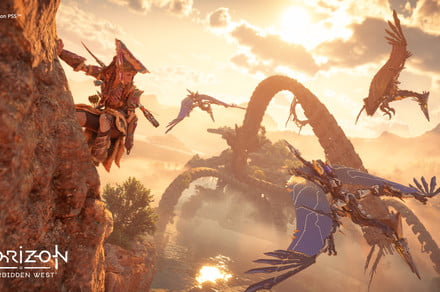 “Horizon Forbidden West improves on just about every aspect of its predecessor with better combat, machines, and traversal.”

Midway through Horizon Forbidden West, Aloy discovers a video from the old world. A holographic figure stands in front of the White House and delivers a hopeful rallying cry for a country at war. “True courage means facing [our] fears with conviction instead of cynicism,” the long-dead speaker firmly declares. It’s a line that sums up Aloy’s entire raison d’être, making her the perfect hero for her “techno-nihilist” times.

Horizon Forbidden West is a sequel to 2017’s hit Horizon Zero Dawn. It once again drops players into a postapocalyptic world where humanity and nature alike have begun to reform following a man-made catastrophe that filled the world with deadly machines resembling malevolent versions of Boston Dynamics robots. Despite its gloom-and-doom premise, it’s not a cynical game. Instead, it presents a bright and beautiful open world full of tribes that have found ways to coexist with machines without sacrificing nature. Aloy sees the potential utopia growing amid the decaying cities, like a rose in concrete, and is determined to save it. She’s persuasive; I was right there with her.

Though it’s not without its technical hiccups, Horizon Forbidden West is a strong addition to the PS5’s growing collection of hits. Guerilla Games solves many of the biggest gripes players had with its predecessor to create a gorgeous open-world game with better traversal, more varied combat, and awe-inspiring machines that are a joy to tear apart.

Upon firing my first arrow, I immediately remembered why Horizon Zero Dawn captivated me in 2017: Its combat is unmatched. The main hook of that game is that players use arrows, traps, and stealth to deconstruct detailed machines piece by piece. Horizon Forbidden West doubles down on those strengths in every possible way with better weapons and enemies.

Slowing down time and sniping a component off a machine with a well-placed arrow remains a satisfying thrill. It turns every battle into a complex puzzle where patience is rewarded. But for players who don’t want to hide in the bushes waiting to strike, the sequel is much more accommodating to different playing styles. Early in the game, I acquired an exploding javelin, which I could chuck at big monsters to cause massive damage, though it would destroy useful parts. Tools like that only make battles more layered. While I tried to salvage as many parts as possible, some tough enemies required that I hit the panic button and prioritize survival over scavenging — and I got a big, gleeful explosion for my trouble.

To make good use of the new tools, Guerilla Games has doubled the amount of machines in this game. While Horizon Zero Dawn mostly featured monsters based on dinosaurs, Forbidden West looks to the wider animal kingdom for inspiration — and it’s better for it. Early in the game, Aloy faces an enormous metal snake that chaotically slithers around. When it rears its head off the ground, it exposes a weak spot: A column of grinding gears on its chest. Moments like that make fights feel more strategic and reward players who can quickly analyze the design and behaviors of any new monster they face.

When a battle starts to feel hopeless, there’s always a way for players to get the upper hand.

The game also retools its melee combat, which is a blessing. In the previous game, spear attacks felt like an afterthought, which made any battle against humans a slog. This time, Aloy can execute more combos beyond light and heavy attacks. She can even create a weak point on man or machine by unleashing a charged power attack. It’s a more thoughtful system that incentivizes players to mix up their attacks and get strategically aggressive.

To round things out, Aloy can now also execute special abilities, thanks to more in-depth skill trees. Every weapon type can gain a special alt-fire mode that can quickly turn the tide of battle. With the javelin, Aloy can throw a few up in the air and rain them down on a patch of enemies. There are “super” abilities too, such as one that raises Aloy’s chance of critical hits for a short period. When a battle starts to feel hopeless, there’s always a way for players to get the upper hand.

Jack of all trades

Combat isn’t the only element that gets a workout here. Just about everything in Horizon Forbidden West is bigger and, for the most part, better. Open-world games like Assassin’s Creed Valhalla tend to give players tons to do, but each activity can feel flat as a result, as if developers were spread too thin to make any one idea sing. That’s not the case here. When Horizon Forbidden West casually drops in a surprisingly deep figure-battling minigame, it could reasonably become an instant obsession for an unsuspecting player.

The game’s ruins are a perfect example of that. There are a handful of decaying buildings scattered around the map hiding collectibles. They’re essentially big puzzle boxes that’ll have players “solving” the space through clever environmental platforming challenges. Guerilla Games may be known for its action, but it might also be the best big-budget puzzle studio working right now.

The Horizon series has some of the best worldbuilding around, and the wrinkles introduced in Forbidden West only add more depth to its present and past.

The only thing the studio doesn’t fully excel at is dialogue. While Horizon Forbidden West has a gripping story that features searing critiques of colonialism and Jeff Bezos-like tech billionaires, it doesn’t always communicate it in the most exciting ways. Many of the game’s characters are devoid of personality and seemingly only exist to dump exposition. Dialogue sequences push the 30-minute mark, with talking heads dryly spouting lore. Those sequences had me scared to start subquests for fear I might trigger a Metal Gear Solid-length conversation.

I understand where this comes from: “Conviction instead of cynicism” describes Guerilla Games as much as it does Aloy. The Horizon series has some of the best worldbuilding and storytelling around, and the wrinkles introduced in Forbidden West only add more depth to its present and past. My favorite side story revolves around a tribe that praises “land-Gods,” machines that literally fertilize the world. It’s one of the many details that paints a wider picture of how different societies rebuild in the wake of apocalypse.

The game’s storytelling is at its best when it lets the environments do the talking. There’s a lot players can glean simply by looking at how tribes have built their villages. Some hide behind thick rock walls, fearfully closed off from the world. Others have let plant life grow into their architecture, showing their close connection with nature. I hope to see future Horizon games give us more environmental stories like that and leave the long-winded conversations for Sony’s inevitable film or TV adaptation.

Journey to the west

When Horizon Zero Dawn launched in 2017, it enjoyed approximately one week in the spotlight before The Legend of Zelda: Breath of the Wild ate its lunch. As impressive as that Horizon game was, it had the misfortune of launching before a game that completely overhauled the genre. Horizon Forbidden West takes that moment to heart by learning the right lessons from its friendly rival, even if it doesn’t fully recreate its strengths.

The most obvious inspiration comes in the game’s approach to traversal. Movement was limited in Horizon Zero Dawn, with Aloy needing to seek out specific paths to climb a mountain or find a rappel point to jump off it. This time, she gets a Shieldwing, a high-tech spin on Link’s sailcloth that lets her glide through the air. It’s a simple addition, but one the game needed. Now players can climb as high as they want without worrying about how they’ll get down.

Similar changes have been made to climbing. Rather than finding specific paths, scanning a surface lets Aloy see every crag she can grab. It’s not quite the same as Zelda’s “climb anything” mechanic (some rock walls inexplicably have no climbable points despite looking exactly the same as ones that do), but it does make exploration feel a touch more fluid.

Any time a ray of golden light washed over a sandy beach or snowy mountaintop, I had to drop what I was doing and bask in it.

The only new feature that doesn’t quite work is swimming. Aloy can dive underwater this time, which can be a mixed experience. On one hand, it results in some gorgeous visuals and adds more depth to the world. On the other hand, underwater movement is slow and the camera has a panic attack whenever Aloy gets too close to a ceiling while swimming. I tended to avoid underwater caverns altogether when possible.

The titular Forbidden West is a consistently mesmerizing sight that’s worth exploring. It’s a technical workhorse from a pure graphical fidelity standpoint, but it’s the art design that really stands out. The world is more colorful, with vibrant flora making every screenshot look like a landscape painting. There’s a real sense that nature has reclaimed the world, transforming each biome into its own distinct ecosystem. Any time a ray of golden light washed over a sandy beach or snowy mountaintop, I had to drop what I was doing and bask in it.

The awe-inspiring visuals do come at a cost. I encountered several technical hiccups while playing, even after a day one patch was implemented. Some were forgivable enough, like the occasional, awkward asset load-in. Others were more jarring, like fairly frequent crashes. One crash left me stuck in the side of a mountain, forcing me to scrub to an earlier autosave. Some of the more egregious problems should be resolved with the patch and more fixes could further smooth it, but it’s worth noting that I encountered these issues on a PS5. The early patch will help reduce issues like this on PS4, but may not eliminate them entirely.

There’s a debate to be had about whether the game’s size is detrimental to the final experience, though I do think Horizon Forbidden West justifies its bloat compared to its peers. Guerilla Games has a wealth of good ideas that fill it out, both visually and mechanically. It’s clear that it cares about this world as much as Aloy does and wants players to explore it with the same wide-eyed sincerity. As someone who can be cynical about the tired open-world genre, I found it to be effective. I want to see Guerilla’s conviction pay off and for the Horizon series to thrive in a harsh gaming landscape.

Horizon Forbidden West establishes the Horizon franchise as a power player in Sony’s first-party arsenal. It fixes the few blemishes Horizon Zero Dawn had by strengthening its combat and adding better ways to get around the world. It suffers from the usual big-budget, open-world bloat with an overabundance of dialogue and technical hiccups brought on by the game’s immense scale. Even with those issues, it excels at just about everything else it does, making it another gorgeous adventure for PlayStation fans.

Is there a better alternative?

Ghost of Tsushima: Director’s Cut is comparable in quality if you weren’t a fan of Horizon Zero Dawn, but want a great PlayStation open-world game.

How long will it last?

The main game took me 45 hours and that was with a 50% completion rate. That makes it longer than Horizon Zero Dawn, which could be fully completed in 60 hours.

Yes. Horizon Forbidden West is easily one of the best games Sony has released since the PS5’s launch. It’s a must-own addition to any growing current-gen collection.

Horizon Forbidden West was tested on a PS5 hooked up to a TCL 6-Series R635 TV.