A home theater system can bring a cinematic experience into your home, but the TV’s back panel can be daunting. With so many connections and types of cables, how do you know what to plug in where? It’s simpler than it seems.

What Are You Connecting?

A modern home theater system can be one of a few things. Soundbars are single units that may have an external subwoofer and satellite speakers. These are easier to set up and often affordable, but they’re not going to have the same performance as a more traditional home theater system.

We’ll be talking about the connections between all of the above, plus your TV, DVD or Blu-ray player, game consoles, and streaming boxes.

HDMI stands for High-Definition Multimedia Interface and has quickly become the standard for connecting most home theater components. Unlike many cables we’ll look at in this article, HDMI can carry video, audio, and additional data, all on one cable.

This makes plugging in devices like Blu-ray players simple. Where before you’d need a video cable plus a pair of audio cables, now you only need one HDMI cable to connect the Blu-ray player to your TV. HDMI can also make more complex connections much easier than they would be otherwise.

HDMI has a special feature known as Audio Return Channel (ARC). This lets a connection from your TV also send back audio to the device on the other end of that connection. Most often this is used for connecting an A/V receiver or soundbar.

Connect everything else to your TV, connect your receiver to the HDMI ARC port (this is typically the HDMI 1 connection), and audio will automatically play through the receiver. Then, when you need to use the menu on your receiver, switch to that HDMI input.

The only thing that makes HDMI cables slightly complex is different versions, with new versions added fairly regularly. A game console might require HDMI 2.0a for all of its video features to work. If you’ve only got an HDMI 1.4 cable, it doesn’t have the bandwidth for everything, so some features won’t work.

Fortunately, there’s an easy fix for this: make sure that whenever you buy an HDMI cable, you get the latest version available. These cables are backward compatible, so you don’t need to worry about having a cable that is too new to work with your older components.

HDMI has mostly taken over duties for video connections these days, so it’s rare you’ll need another connection to plug your streaming box into your TV, for example. Still, if you’re connecting an older component or using an older TV, you’ll still run into these types of connections.

Many, but not all, of the cables use a standard RCA connector on the end. This is a single pin in the middle, with a circular metal cup on the outside.

If you’re looking to connect a high-definition video signal without using an HDMI cable, component is your best bet. This cable has three RCA connectors, colored red, green, and blue. These split the video signal into luminance (labeled Y) and two color channels (labeled Pb, Pr or Cb, Cr).

This cable is increasingly uncommon, but you may need it if you’re looking to hook up an older player capable of high definition, like a game console or Blu-ray player, to your TV.

Though the name is easy to confuse with component, composite is much simpler. This combines the entire video signal into one cable with a yellow RCA connection.

Though this was once the most common way to hook up video, it’s not used in most newer home theater components. If you’re using composite video, it’s likely to hook up an old DVD player, VCR, or game console.

S-Video was a superior option to composite video until it was eclipsed by component, and later, HDMI. This cable separates the video signal into luminance (black and white) and chroma (color) signals across four pins. For convenience, these are all packed into a single multi-pin connector.

S-Video has historically been used in some VHS players and DVD players, but the most common use case for it these days is to hook up older game consoles with superior video quality to composite.

Similar to video, HDMI has mostly taken over typical audio connections, combining them with video. HDMI ARC makes connecting A/V receivers, soundbars, and amplifiers via a single connection much easier than it used to be. Still, you’ll sometimes need to use a special analog or digital audio connection.

As with video, many of these cables use standard RCA-style connectors.

There are a few digital audio connections for home theater use, but you’ll mostly find two: optical and coaxial. Optical connections use fiber optic cables with distinctive connectors on each end.

A coaxial digital audio connection uses a standard RCA cable with an orange connector on the input jack, but the signal is purely digital. These used to be more common than fiber optic connectors but are now equally popular.

While HDMI has taken over for analog audio in most cases, you’ll still see analog RCA audio cables fairly often. If you’re setting up a CD player or high-resolution audio player, these will most often connect via RCA.

The other type of common analog audio connection is a headphone jack. These take either 1/4-inch or, more typically, 3.5 mm connectors and let you plug in your headphones for private listening.

RELATED: The Best Soundbars of 2022

Unlike the relatively complex nature of audio and video cables, the cables you use to connect speakers are simple. For each speaker, you connect one cable which has two connections: a black wire and a red wire.

Speaker wires can connect in a few ways, but typically, it’s either a bare wire on the end or a banana plug. A banana plug resembles the fruit it’s named after and plugs into a circular connector on a speaker. These connectors will often unscrew to work as a clamp with a bare wire as well.

Bare wires are slightly trickier to use, but this simple connection is almost guaranteed to work regardless of what kind of connectors your A/V receiver and speaker may have.

Subwoofers are a unique case, as they frequently have integrated amplifiers. These often don’t use standard speaker wire, using instead the standard RCA audio cable we mentioned above.

Are you looking to upgrade your home theater center? Check out our recommendations to find out how you can level up your entertainment game.

The Best Home Theater Systems of 2022 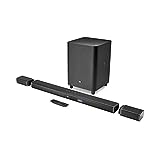 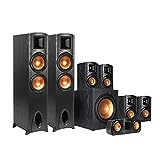 Home Theater Wiring: What Are All Those Connections? originally appeared on HowToGeek.com 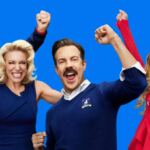